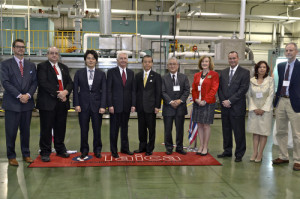 On April 22, our wholly-owned subsidiary Taica Cubic Printing Kentucky, LLC (TKY) held the Grand Opening Ceremony to announce the completion of its facility in Winchester, Kentucky. The new factory will begin commercial operation in September, 2013, mainly supplying automotive industry. The ceremony was attended by Steven Beshear, Governor of Kentucky, Ed Burtner, Mayor of Winchester, Motohiko Kato, Consul-General of Japan among other distinguished guests, hosted by Taito Suzuki, President and COO of Taica Corporation, our sole-shareholder, and Takashi Goto, President of TKY.

TKY is the first manufacturing base in North America for Taica Group, and is the second overseas factory for “E-CUBIC®” after China factory. Through the operation of this factory, Taica Group will provide enhanced procurement and transportation efficiency for the leading automakers’ manufacturing bases in North America, and will grow its 3D decoration business in the region.